How To Play: Pick Up Group

Last week you were introduced to Pick Up Group. Now we will go a little more in depth with it.


The mechanics are pretty simple and very easy to learn.

Everyone gets a hand of 5 cards from the Noob player deck. It might look something like this.

You will then pick one card and add it to your party face down. You want to choose carefully, because you only get to pick the one.

So you pick one, probably the Sneak, and place it face down into your party. Everyone reveals their cards simultaneously and resolve their effects.

You then check if anyone's party can go on a dungeon run. As it's the first turn, that would be a no, but in future rounds every party that can go on a dungeon run does, even if its the same dungeon as another player. Everyone who did collects their loot, the dungeons that were used are flipped closed, and every card used to go in the dungeon run is logged off (discarded).
This means if you go on a dungeon run you then have to start from scratch with a brand new party. You might have to decide if you want to hit an easy dungeon now or build up your party to hit a better dungeon later.

After the dungeon phase you finally take your hand, including any cards you had to pick up, and pass them to your left. 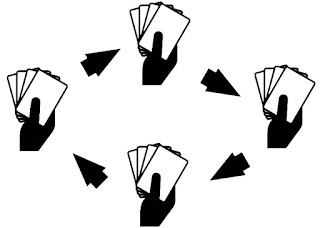 You will now have a hand of leftover cards from another player. Depending on the number of players you might not get your original hand back, but even if you do all the best cards will be gone.


And the game continues like that until someone doesn't have a hand. At which point everyone draws 5 new cards from the current deck (keeping any cards you might still be holding). There are 2 draws for each deck, so when you run out Noobs then you move onto the Veterens deck, and when that is out you move onto the Legends deck.

Each card is very different from each other, and they gain either better abilities or higher power as you switch decks. As the game gets closer to the end massive raids are built, instead of parties, and each card may effect every other player. If the Legends deck runs out (or all the dungeons close) then everyone has logged off and the game is over.


And that's basically how you play. It's a load of fun and I plan to have a Print and Play available whenever the kick starter goes up.

Email ThisBlogThis!Share to TwitterShare to FacebookShare to Pinterest
Labels: PickUp